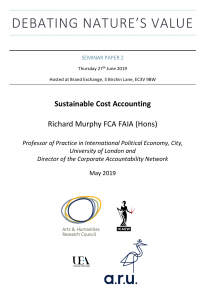 Earlier this year I was asked to think about the relationship between financial accounting and natural capital accounting by Dr Rupert Read of the University of East Anglia and Prof Aled Jones of Anglia Ruskin University. I am grateful to them because I would not have done this otherwise. I will be presenting my thinking at an event hosted by the Institute of Chartered Accountants in England and Wales (of which I am a Fellow) on June 27. That thinking is more radical than I expected.

What I realised very early on in my reading was that there was no reconciliation possible between the two systems of accounting I was looking at. To explain this, all accounting frameworks are based on what is described as a ‘capital maintenance concept’. This defines what the framework is seeking to measure the increase or decrease of, which increase or decrease is then described as profit or loss.

In the case of financial reporting as defined by International Financial Reporting Standards (and their local equivalents) the capital that a reporting entity must maintain is its financial capital. This is not the physical capacity of the entity used in the course of trade, which was, broadly speaking, what historical cost accounting used as its capital maintenance concept. Instead it is all about increasing the value of assets under the control of the entity, whether that increase arises as a consequence of its own actions or simply because of movements in the market as a whole.

In contrast natural capital accounting has a very different capital maintenance concept inherent within it. Focusing on the world as a whole, its logic is that that natural capital of the planet must be maintained. I have interpreted this as meaning that the natural capital that might be utilised in a period is that stock of natural resources that might be used by humans at that point in time to support their material needs without prejudicing the opportunity of those in future periods to meet their needs in similar fashion. As is apparent, this is very different from the capital maintenance concept of financial accounting, and in my opinion this is one of the many frontiers in the management of the economy that the climate crisis creates, but which have hardly been touched upon as yet.

This requires that the financial capital maintenance concept be abandoned. To make what I am saying clear: IFRS accounting is inappropriate in the era when we are tackling the climate crisis and has to be replaced.

We cannot, however, go back to historical cost accounting as that is backward looking when what is required must be forward-looking.

I am, then, suggesting the adoption of what I am calling sustainable cost accounting as a basis for accountancy in the era of climate crisis. Like other capital maintenance concepts this has to be capable of relatively straightforward explanation. I suggest that this concept is one that reconciles the sustainability of the entity using it with the sustainability of the environment in which it works. It does this by requiring that each such entity appraise its environmental viability, and it is this environmental viability which then determines whether the entity is a going concern, or not.

I stress that in undertaking this appraisal the entity would have to use the precautionary principle. In other words, if there was doubt as to viability it must err on the side of environmental caution. The entity could not then, for example, assume that an as yet unknown solution to a current problem will be found: that would be unacceptable. And not can optimistic outcomes be accepted when the evidence is that in this area they rarely occur. This approach does, then, re-embrace the idea of prudence that accountancy abandoned when adopting International Financial Reporting Standards.

In practice this approach would require that the entity undertaking this review must appraise all its business processes and the investments related to them to determine whether they can be made compliant with the constraints that ensuring global temperature changes are capped at 1.5 degrees impose. Given the use of the precautionary principle, this requires that the processes become carbon neutral within an agreed timescale, and not later than 2030, and that the costs of achieving this be assessed.

The entity has to then state the value of the assets engaged in these processes in their accounts at the lower of their cost or net realisable value (both estimated using the principles of historical cost accounting) or at that cost or net realisable value less the provision required to make the processes in which the asset is used carbon neutral. If the result is a liability, rather than an asset, provision for that liability would have to be made. And, unless it can be shown that there are reasonably anticipatable new sources of capital likely to be available (which must be specified) to assist this process of transition then they cannot be taken into consideration in determining the resulting solvency, or otherwise, of the  entity. In other works, prudence shall again prevail.

If when this appraisal has been undertaken the entity cannot be shown to be solvent on a sustainable basis the entity will have to cease to trade, just as it might in any other circumstance. That it might command significant financial capital at the time of doing so is not the point: the constraint in sustainable cost accounting is the environment and not availability of financial capital, and it would be better that the financial capital in question be reallocated to other activities if the result of its use in the existing activity would be the breach of environmental constraints. This is the world we now live in.

This approach to accounting is radical. The impact on the valuation of many companies – and most especially the most complex of multinational corporations – may be dramatic. This, however, is only a recognition of what tackling the climate crisis demands. Pretending that the commercial world can continue as at present without taking the dramatic steps required to transform all aspects of their processes is to simply misrepresent the truth that we must face. Such action is going to have to happen, in which case accounting must reflect it.

Sustainable cost accounting recognises this reality and requires that action to address this issue be taken immediately. It then demands that realistic plans to address identified issues be prepared and costed. And it demands that those companies that cannot achieve these goals cease to trade. This is what the climate crisis requires. This is how accounting should respond to it. The reality of the climate crisis requires nothing less.

The paper supporting this work is here.